Last night, I attended my first live debate. I witnessed Hillary Clinton and Bernie Sanders do battle as to why they should be the Democratic nominee at Miami -Dade College.  It was a rowdy, raucous atmosphere.  The energy was electric, and we were all ready for the fireworks that were going to erupt on stage.

Now I’m no pundit or pollster, but these are my takeaways as a layperson/political news junkie. 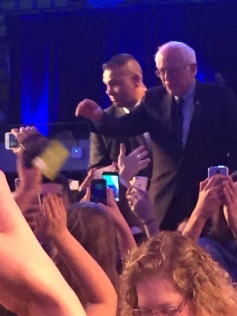 The energy for him was strong, he had rock star status for sure. They screamed, stomped and urged him on. The establishment Dems, however, weren’t so enthusiastic. Idealism vs Pragmatism? Maybe.

The moderator who was representing Univision (and was notoriously told by a certain candidate on the other side to “go back to Univision”) was tough as nails. In another life he would have made an amazing defense attorney with his masterful cross examinations, holding the feet to the fire of the candidates (mostly Hillary).

But Hillary did clap back when he asked her if she would step down if she was indicted over her emails. “That’s ridiculous, I’m not even going to answer that!”

I’ll be watching more of him for sure.

I guess my Spanish will have to improve though.

Biggest laugh of the night?

The crowd was more in favor of Hillary but the Bernie group was strong. Bernie BOMBED the question on if he regrets praising dictators like Fidel Castro and the Nicaraguan leader Daniel Ortega back in the ’80s. That was the wrong place and crowd to say ANYTHING nice about Castro. The same themes came up over and over — Bernie really despises Wall Street. He’s radical to the core. Hillary wants to work within the system to change things. So, complete anti-establishment in Bernie vs. middle of the road in HRC.  I don’t think many minds were changed last night.

To be blunt, it has been said that both candidates are tone deaf to the concerns of African Americans.  It’s more of we weren’t even part of the conversation. Granted, last night’s focus was immigration. Both candidates pretty much agreed, with onion thin differences. But Bernie weaves in his plan every chance he got to regarding getting Wall Street to pay for his lofty goals. He talked about investing in jobs programs, free public college, raising the minimum wage to $15 per hour, and universal health care. He briefly mentioned the high level of unemployment of African American young people (51%). Hillary discussed breaking down barriers. But there was no discussion of public safety, criminal justice, investing in drug/mental health treatment, and other than Bernie’s jobs program, no specific details of how more jobs will be created. I question Bernie’s practicality; I question Hillary’s resolve to get things done. Will she back down in the face of adversity, or fight?

Last night, I met some amazing people. It was so awesome to be a part of our process, and watch how it works. I was truly honored to be in attendance.

But will I #FeeltheBern or #StandwithHer when I early vote in Florida this weekend?

I still don’t know. There will be a lot more research in the coming days. But rest assured, your Resident Legal Diva will be voting, because your vote is your voice. Too many people died for me and you to have the right to vote!!

One thought on “The Diva & The Dems: My 1st Live Debate”