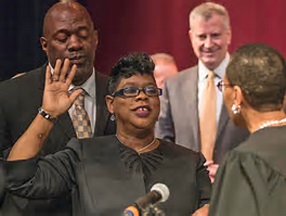 The third Legal Diva of Color this month is Darcel Clark. On January 16 of this year, Ms. Clark made history as being the first woman to become the Bronx  District Attorney, and the first African American female District Attorney in the State of New York!

Her path to success was certainly not an easy one. As a true “daughter of the Bronx”, she hails from the Soundview section of the borough.  Her parents both worked tough jobs, but took the time to be involved in their community.  These early lessons clearly rubbed off on their daughter. Ms. Clark attended New York City public schools, then went on to receive her undergraduate degree at Boston College, and her law degree at Howard University.

Upon graduation, she returned to the Bronx and never left. Ms. Clark was a prosecutor for 13 years in the Bronx District Attorney’s Office, rising to the rank of Supervisor of the Narcotics Bureau, and Deputy Chief of the Criminal Court Bureau.  In 1999, New York City Mayor Rudolph Giuliani appointed Ms Clark to the bench.  She served as a judge for a total of 16 years before winning the coveted position of District Attorney in a landslide election in November 2015.

Ms. Clark stated in her swearing in speech at Lehman College:

Thank you Darcel Clark, for making history, and being a Legal Diva of Color!