The grand jury and the Department of Justice have both come to the conclusion that now former Officer Darren Wilson should not face charges in the shooting death of Michael Brown. This was not a surprise, based on the legal standard in police shooting cases, as well as the forensics in this case.

What is also not surprising to me is the rest of the Department of Justice report, which points out a plethora of civil rights violations in Ferguson and surrounding communities in St. Louis.

The reason why I am not surprised is the fact that the people of Ferguson had such a visceral response to the shooting of Michael Brown, and that they were so quick to believe that Officer Wilson shot the young man out of malice. Many like to believe that the residents of Ferguson were either racist, victims of “race baiters” (whatever that means), or just devoid of any independent thought.

I however felt differently. I believe that where there is smoke, there’s fire. I always questioned that there had to be something deeper under the surface. The shooting of Michael Brown was just the tip of the iceberg and now the Department of Justice has provided empirical evidence that support the residents’ claims of systemic racism and wrongdoing.

The reality is for many years, the Ferguson Police Department has been violating its people. They have been arresting African-Americans in that community at a higher rate; African-Americans in the community have been levied fines at a higher rate than their white counterparts; and they struggled to pay those fines, doing what they had to do to be responsible citizens. Yet, they found no relief. When the tragic shooting of Michael Brown occurred, this was the tipping point. That is why the people reacted in such a violent angry way. Dr. Martin Luther King Jr once stated that “a riot is the language of the unheard”.  While I do not in any way shape or form condone the violence or the rioting that occurred, it originated as the means and the method of people that feel they had no voice. The courts provided them no remedy — they were excessively fining them.  The police were abusing them (as proven by the DOJ report). Voting was ineffective, because the candidates they elected were not bringing their concerns to the forefront. When the people that are in power are exchanging racist emails,  joking about the ability of an African American man to hold a job for a prolonged period of time, or that aborting an African American baby would positively affect the crime rate, where is one to go to get justice?

So what now? What needs to happen is that law enforcement around the country must take a long hard look in the mirror at their practices, their recruiting methods, and how they are interacting with the community. Because like President Obama said in a recent speech, this is not an isolated incident. There are Fergusons throughout this nation. And if we do not take proactive steps to fix this, we are doomed to have a repeat of the horrible events we saw around the country in 2014. And no one wants that. It is critical to have diversity at all levels of the criminal justice system. I can assure you that the abuses would not have been as rampant in Ferguson if there were more African-Americans on the police department. The same goes for in the court system, as well as in the prosecutors and defense offices of Ferguson. The racist emails are a clear indicator that these actors in the criminal justice system do not care about the well-being of the people that they are tasked with protecting and serving. This is an issue that needs to be addressed going forward. 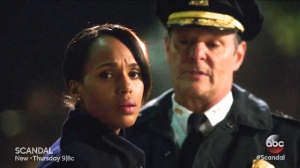 In last week’s episode of Scandal, writer Shonda Rhimes took on the issue of race and policing with a storyline of a police officer shooting an unarmed teen. In one of the closing scenes, the police officer goes off on a very anger filled rant, where he states some key points which I have heard before. He says “you people have not taught your children to respect me“, and secondly “I kiss my wife and kids goodbye, and drive 40 miles to protect these people, for what?”

The reality is, African Americans (like most people), raise their children to respect law and authority. The “rub” is when you have a situation like Ferguson, where the trust and belief of the system has been eroded by abuse of authority. Then that respect that was taught,  turns to resentment, then anger. Once that trust is broken, it takes a very long time to rebuild, requiring a conscious effort from both sides.

The second point is the heart of the balance in policing. When officers do not live in the communities they police, an air of detachment forms. It’s going home to your palace, as others go home to their hell. There needs to be a more concerted effort for police to reside in or close to the communities they police; and when they start to get burnt out or resentful of the people they are charged with serving, then be rotated to a different area.

It is clear from the evidence that the DOJ has uncovered that the people of Ferguson had no voice for a very long time. Now, this study has given them a voice. Hopefully changes will come from this.

There are no quick fixes or easy answers — but we have to try. Lives depend on this. ALL lives.  Because all lives matter — civilian and police. No matter the color of the skin or the badge you are wearing, a mother’s tears are the same.

One thought on “No, They Weren’t Overreacting: Ferguson & The Future”